A guide to measuring impact for authors of scholarly publications. 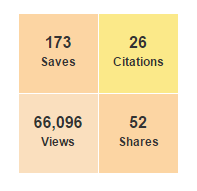 Altmetric and PLoS Article-Level Metrics for Retention of Memory through Metamorphosis: Can a Moth Remember What It Learned As a Caterpillar?, by Douglas J. Blackiston, Elena Silva Casey, and Martha R. Weiss, all of Georgetown University. Published in PLOS One, March 5, 2008. Measured in July 2015.

PLoS Metrics include: Saves to Mendeley and CiteULike; Citations in CrossRef; Views in PLoS and PubMed Central; and Shares on Facebook and Twitter.

Traditional citation metrics only count citations to a given article in other peer-reviewed publications. "Altmetrics" attempt to broaden this picture by including citations, quotations, and mentions in other venues. Some of the places altmetrics seek to measure include:

The authors of "Altmetrics: a manifesto" argue that altmetrics complement traditional citation metrics by providing (1) a broader measure of research impact beyond peer-reviewed publications; (2) quicker and more responsive measurements than traditional citation metrics, which can take months or years to compile; and (3) a richer view of impact by including more context of citations.

Altmetrics do not replace traditional citation metrics, but can provide additional evidence of an article's (or researcher's) impact on the scholarly community.

Social Feed Manager software was developed to support campus research about social media including Twitter, Tumblr, Flickr, and Sina Weibo platforms. It can be used to track mentions of you or your articles and other research products for the previous seven days and on into the future. Email libdata@gwu.edu to get started with Social Feed Manager or to schedule a consultation.